Home › Latest News › What was so special about the Bat Zion Program?

What was so special about the Bat Zion Program? 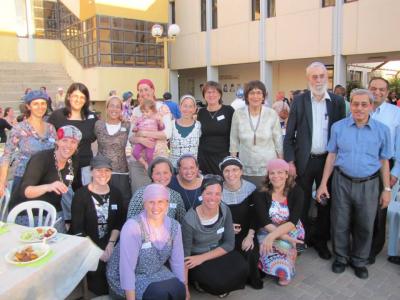 Orot  Israel College was founded in 1978 and the Bat Zion program, Orot's overseas program was established in 1979.  The Bat Zion program was unique in being able to share the vision of religious Zionism from the heartland of Israel, with overseas students learning alongside their Israeli contemporaries. Bat Zion's goal was to inculcate student's with the philosophy of Rav Kook, that Torat Yisrael, Am Yisrael and Eretz Yisrael constitute an inseparable unit. During their year in Israel, they had an opportunity to learn about the country with a "Tanach in hand", meet the people of Israel and fall in love with the country.

Throughout the years Orot Israel College became the home to approximately 1000 Bogrot from Canada, USA, Europe ,in addition to young women from South Africa and  Australia , who came through Bnei Akiva as part of their MTA program (Midreshet Torah Va' Avodah).

Why was our Bat Zion program different from the many other one year programs that existed and still exist? The main difference was our location and our belief in the importance of creating a program that was integrated with Israeli students.

Unlike most other programs, the Bat Zion program was not situated in Jerusalem but it was part of the Orot Israel College campus in Elkana. The Bat Zion students dormed together with Israeli students and were able to participate in Hebrew classes alongside with their Israeli friends.

This enabled young women from abroad to get to know Israeli students , spend Shabbatot together with them in their homes and thus have the real Israel experience. We also recommended to our students to have an Israeli "adopted family" in Elkana which served as a "home away from home" and once again this helped to improve their Hebrew speaking skills and to get a feel of "real life" in Israel. They shared activities such as tiyulim with the Israeli students as well as attended special extra-curricular programs that the College hosted such as guest speakers & Yom Yerushalayim dinners.

Studying at a College such as Orot Israel College with hundreds of young women from all over the country, at times unfortunately also made our Bat Zion students understand the meaning of mesiroot nefesh  and Kiddush Hashem. Unfortunately throughout the years, the College lost several students in terrorist activities or had students that lost siblings while serving in the IDF as did some of the local families that were "adopted families" to our students. Attending funerals in Elkana and visiting local families during their week of Shiva, hearing firsthand stories of courage and dedication to Am Yisrael without any doubt had a great impact on the Bat Zion students.

The program thrived for some thirty years, through to 2008. Although Bat Zion program no longer exists, we at Orot still are in close touch with our Bogrot and value our ongoing friendships. I personally miss the program very much and feel fortunate to be in touch with many Bogrot both in Israel and abroad. Despite the fact that I may not be totally objective, the Bat Zion students were an exceptional group of young women, it's no wonder that I still miss them so much. However, now with Facebook and other internet media it is much easier to keep in touch.

I can't believe how many of you already have had your children spend their Gap Year in Israel as well as how many of you have married off children and are already at the Grandparent stage of life. Please continue you to update me with the important Mazal Tov's for our Orot Family Updates for our e-newsletters.

At Orot Israel College we are very proud of the large number of graduates that have made Aliya. Our Bogrot live throughout the country, North to South, in cities, kibbutzim and Yishuvim and are involved in many different professions such as medicine, nursing, education, the various therapies, hi tech , non-profit organizations, businesswomen etc.

I know that several of our Bogrot that currently live abroad are thinking about making Aliya in the coming years. We hope and pray that your dream of coming on Aliya becomes a reality. To our Bogrot that live abroad, play active roles in your local communities, there is a lot of work to do there as well!

During the next few months we will share with you various Divrei Torah from Bat Zion Rabbanim, Madrichot and staff members as well as share with you articles written by one of our many Bogrot that lives in Israel.

I would like to ask Bogrot that would like to share with us their story of how their year at Orot influenced their decision to make Aliya to kindly contact me at nomi@orot.ac.il and of course please keep on sharing your wonderful smachot with me.

During this very challenging period of our lives as we try to live alongside with the corona pandemic , I wish you and your families good health.

Take good care of yourselves and stay safe.

Looking forward to hearing from you.