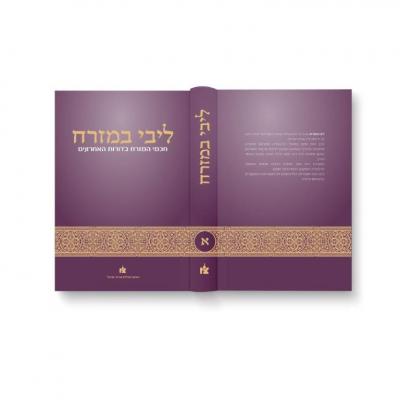 Rabbi Dr. Moshe Rachimi, the Dean of Orot Israel College and editor of the periodicals, avowed that recognition of the Academic Council attests to the publications’ academic quality, “We believe that a College of Education must emphasize the academic aspect along with an investment in the betterment of Education studies and the preparation of the next generation of teachers.”

The Oreshet periodical delves into topics, such as :The flag of Israel in Jewish sources, The relationship between modern psychology and Talmud, A model for synchronous teaching on search and critical use of literary databases on the Web and more.

Here are some abstracts in English from the first "Libi BaMizrach" Annual Scientific Conference book that was published by Orot Israel College:

The aim of the annual "Libi BaMizrach" International Scientific Research Conference, is to accelerate and promote research into Sephardic Heritage in order to understand more fully its history, literary work, and, more generally, its contribution to the milieu of Jewish life through the generations.

The first "Libi BaMizrach" International Scientific Research Conference discussed the "Sephardic Scholars of the Later Generations- Rabbinic Leadership in the Islamic Countries in the Nineteenth and Twentieth Centuries"  was held on May 10, 2017 with an audience of 200 people.

Topics of discussion included: Jewry from Moslem countries on the eve of the Israeli War of Independence, Zionism in Morocco from personal and literary perspectives, the absorption of new immigrants from Morocco, the Jews of Uzbekistan during the Soviet era and their Aliyah to Israel, mass Aliyah from Yemen, and more.

Noted historians and Middle Eastern Jewry researchers examined the immense contribution of Olim from Islamic countries since the establishment of Israel, in various areas that included, religion, emunah, Torah and culture.  From a Zionist perspective, many settlements were established by these new immigrants and played an important part in the development and survival of the newly declared State of Israel.

The third "Libi BaMizrach" International Scientific Research Conference discussed "Interaction between Jews of the Islamic Countries and Ashkenazi Jewry, Society, Culture and Economics" and took place on Wednesday, May 29, 2019 in Orot Israel College.

As part of the historical insights of the Jewish society as a whole, the topics of the conference dealt with the complex ties that have been forged between East and Western Jewry. The purpose of the conference was to open the doors of interdisciplinary research into the history of Jewish society and to deepen the study of the various connections between the various Jewish groups and to what extent they have contributed to the consolidation of social identities of the Jewish Diaspora or the social and cultural affinity between them.

Lectures were given by leading academic professors on a wide range of topics, as follows: “Rav Asher ben Yehiel’s Doctrine of Judgement- Between Germany and Spain;” – “Harav Yaacov Sapir and his Relations with the wise Men of Yemen and their Spiritual Heritage;” – “Press Relations Between Babylon and Europe - the Journalistic Activities of Rav Shlomo Bechor Hotzin from Bagdad;” – “The Appearance and Spread of Ashkenazi Tradition in Modern Israel;” – “Does Custom Nullify Halacha?” – “Rav Haim ben Atar’s Influence on the Hassidic Movement;” – “The Viennese Israel Aid Society’s Assistance to Yemenite Jewry in the Early Twentieth Century;”  “The Israeli Unity Plan as a Platform for Cooperation Between Eastern/ Sephardic Rabbis and European Rabbis in the Religious Zionist Movement;” – “Are We Not Brothers? - The Ties Between Rav Yeshaiahu Shapira and Rabbis from Islamic Countries in the 1920s and 1930s;” – “The Relationships Between the Rabbis of Jerusalem, Izmir, Tunisia and Algeria in the 19th Century; “ –“Rav Yosef Caro’s Use of the Ashkenazi Ruling in the Writing of Habayit Yosef;” – “Diaspora Meeting in the Orsay Beit Midrash in Paris;” – “Meeting Between Polish Jews and Beirut Jews;” – “The Ashkenazi Merchants Came to Exploit Our Precious Things;” – “The Routes of Commerce Between Europe and Yemen;” – “To Die in Jerusalem – The Community of Ashkenazi Widows in Jerusalem in the early Mameluke and Ottoman Periods” – “Al Maqrizi’s Description of the Jewish Faith in ‘Al-Chitat.’”