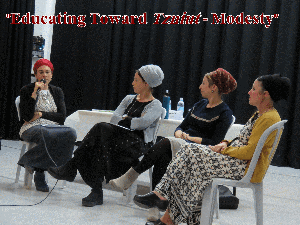 Recently an Educational Forum on the subject of “Educating Toward Tzniut " was held at our Elkana Campus. On the one hand, the choice of this particular topic arose as a result of its obvious importance. While on the other hand this topic was chosen particularly due to the discomfort of speaking about it in a public forum. The goal was to open with a discussion and to begin a process in which each student will be able to formulate her own position in regard to this important subject before she ventures out into the educational world.  The working assumption was that this Educational Forum cannot cover the subject in its entirety and that which was started here is to be continued.

The Forum opened with a show depicting differing viewpoints on the issue under the banner of “Modesty As I See It.” Rabbanit Dr. Vizel presented a position and raised several possible angles and questions regarding that stance. She addressed modesty as a broad and fundamental value.
Then, the Dance majors put on a short presentation accompanied at first by a running commentary by Ms. Michal Zarka, one of the dance instructors, after which one of the dances is repeated. The entire filled to capacity audience both students and staff members, was moved and mesmerized by the dances and by the running explanations.

Ms. Merav Shapira, the Dance Department’s Jewish issues coordinator, connected this awe inspiring performance to the centrality of the human body in the worship of Hashem, and to the importance of what is revealed and what is concealed. This part of the presentation was closed by Dr. Tzippy Rein, a psychologist and acting head of “The Family Center” which is located in the college, who presented her viewpoints in dealing with the demands of modesty and Halacha- Jewish law.

After the presentation the students broke up into groups of their choosing. The discussions were held in round table forums with each group moderated by staff members who volunteered their time to lead open and frank discussions on the female issue of tzniut.

It was wonderful to hear the feedback from the different groups and the variety of opinions that arose from both the moderators and the students. In spite of the time constraints, the round-table format enabled there to be open and frank discussions on this loaded issue.

Among the staff in attendance were: Rabbanit Nechama Ariel, Dr. Rivka Raviv, Ms. Vered Kahan, Ms. Rachelli Bartov, Ms. Nana Tchiya, Dr. Yael Klein, Rabbanit Dr. Leah Vizel,  Rabbanit Miri Ben-Shitrit, Ms. Revital Vaknin and others. There were about as many opinions voiced as there were participants, staff and students combined! The idea to make this a multi-disciplinary event, proved itself above and beyond all expectations.

The next section of the afternoon was a lecture in the auditorium by Noa Yaron-Dayan, a writer and former TV moderator. Noa had come from a world which was one of glitz, ratings and total exposure, to a world of Torah and modesty. She shared with her audience the ways in which she dealt with and views the issues of tzniyut and living a life of Halacha.

The highlight of the day was a panel comprised of the heads of several ulpenot- religious girls’ high schools, and other educators who discussed educational dilemmas and the ultimate decisions which they undertook in the matter of educating to modesty. The panel members included: The head of Ulpenat Tzvia in Lod, Chaggit Yogev, The head of Ulpenat Bnei Akiva in Hadar Ganim- Petach Tikva, Tal Navoni, and Rabbanit Shlomit Ben-Shaya from Ulpenat Lehava. These panelists suggested important nuggets for thought regarding a healthy balance between the proper attitude to have towards one’s body and to the all important principle of modesty, including tzniyut in dress.
In reflection, the issues which were raised that day had repercussions and are continuing to reverberate in the halls of the college now as they did then.