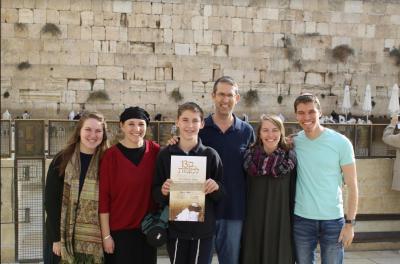 The months of June 2020/Sivan-Tammuz 5780 mark my 26th aliya anniversary and the 25th anniversary of receiving my Israeli driver’s license*, English teacher’s license and marriage license – two out of three thanks to Orot Israel College Elkana.
I spent two very diverse years in Orot. In 1992/ תשנ"ב, it was all about experiencing Israel, as part of a joint venture of Bat Zion with Bnei Akiva of North America’s Midrash Umaaseh program.
Every student could schedule hours with the Israeli students and/or with Bat Zion lecturers, and I found myself studying with renowned teachers, such as Rav Yaakov Ariel, Rav Hess זצ"ל, Rav Dassberg זצ"ל and Rav Dr. Yona Goodman, while ending each week sitting in Room 108 with Rav Ari and his guitar. Additionally, I took part in the מורה לגולה program, the first stepping stone in teacher training to work in Israel and abroad, including the Ulpana next door, where you can find me until today.

Two years later, as a new עולה, I took on a double course load to complete my EFL (English as a Foreign Language) teaching degree while discovering the delight in waking up girls for התנדבות as one of three מדריכות , a handy tool as a chaperone on school trips. While first getting settled on campus, prior to the start of Bat Zion תשנ"ה Rav Felix and Nomi found me a spot working in the photocopy room – and as a teacher – knowing how to clear a jammed photocopier is a life skill! The year culminated with final exams and dancing with Bat Tzion staff and חניכות at my wedding to a soldier from Elkana.

Since then, my years in Orot and the people I encountered there have been a significant part of my professional life. I began teaching while working towards an MA with Professor Joel Walters, who had taught me in the outstanding EFL teaching program at Orot, headed by Dr. Vitela Arzi. Years later, I had the opportunity to work with Rav Dr. Yona Goodman and Elchanan Glatt at Yeshivot Bnei Akiva. Since 2017, I’ve been a National Counselor for the Ministry of Education, where I’ve found myself coming in contact with many other Orot graduates.

On our 1992 תשנ"ב sweatshirt, Robert Frost’s famous quote appears, “Two roads diverged in the yellow woods and I took the one less travelled by and that has made all the difference”. The decision to study in Orot Israel College in Elkana, twice, is a testament to that.
*The law demanding Olim take a driving test came into effect less than half a year before making aliya.
Rachelle lives in the Shomron where she volunteers leading tours at the local archeological site and “Israel’s Lookout”, mother of four, ages 23 to 13.