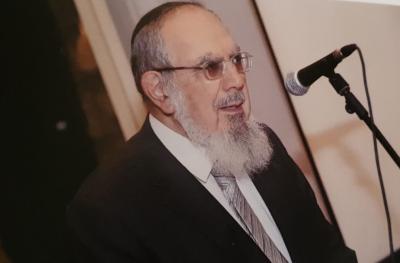 I feel deeply privileged to have been one of the thousands of students of HaRav Professor Nachum Eliezer Rabinovitch זצ"ל, who recently passed away at the age of 92. Rav Rabinovitch was one of the greatest leaders of religious Zionism, a respected posek halacha and an illustrious figure who for many years was the Rosh Yeshiva, of the Hesder Yeshiva "Birkat Moshe" in Maale Adumim.

One of the many things that I learned from Rav Rabinovitch was the connection between the world of Torah and the world of academics. Rav Professor Rabinovitch זצ"ל served for many years as the Chairman of the Board of Trustees of Orot Israel College thus strengthening this important connection.

I plan to continue his legacy at Orot Israel College. Our students are taught to be inquisitive and to ask the questions. This prepares them to be better teachers who will encourage their students to always ask questions and to broaden their horizons.

I want to take this opportunity to thank Orot's staff for "virtually" being there for our students during COVID-19.