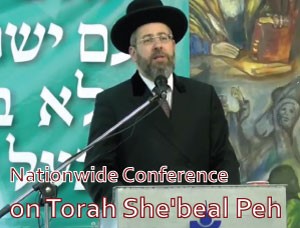 Torah She'beal Peh (the Oral Torah) represents a fundamental aspect of Jewish education taught in schools across Israel and around the world. It includes the study of Mishnah, Gemara and Halachah, the building blocks of Jewish ritual life. Orot Israel College, on both its men's and women's campuses, trains the future Torah She'beal Peh teachers who will transmit these critical Torah values to their students in the classroom.

In order to translate our students' academic knowledge into more personal, relatable material in the classroom, Orot inaugurated the first nationwide Conference of Torah She'beal Peh this year. This three-day conference on two campuses brought rabbis and Torah scholars from across the country to enrich Orot students' understanding and pedagogical ability.

The Women's Campus program focused on "VeHigadeta L'bitcha" – "And You Shall Teach Your Daughter", addressing different ways to improve and apply women's Torah education. Following a panel discussion which included Rabbanit Dr. Leah Vizel, Orot's Dean of Students and Rabbanit Esti Rosenberg, the Roshat Beit Midrash of Midreshet Migdal Oz, the women divided into individual tracks for lectures from Orot staff, as well as visiting instructors including HaRav Yaakov Ariel, Rav of Ramat Gan, as well as HaRav Benzion Elgazi, the founder of the Tzurba Merabanan Program.
The second day of the conference focused on the Torah of Rambam, which has grown in prominence and importance in Israel. Speakers included Rav Arye Shtern, Chief Rabbi of Jerusalem, Rosh Yeshiva of the Hesder Yeshiva in Ma'ale Adumim Rav Yitzchak Shilat, as well as Nobel Prize Winner Professor Yisrael Aumann.

On the final day of the conference before Pesach, thousands of Orot students and visitors gathered at the Rehovot campus for a day-long program which divided into four distinct tracks: Gemara, Torah Personalities, Law According to the Torah, Halachah, and Midrash and Aggadah. Speakers at the program included Ashkenazic Chief Rabbi of Israel Rabbi David Lau, Rav Shlomo Amar, the Sephardic Chief Rabbi of Jerusalem, Rabbi Yaakov Shapira, Rosh Yeshivat Mercaz HaRav, Rav Zvi Rimon, the Head of the Center for Halachah and Education, and many, many others.

We take great pride in the excitement surrounding the study of Torah She'beal Peh that permeated the entire conference, and look forward to the second annual conference which will take place during the coming academic year.

Click here to watch the main sessions from the final day of the conference.