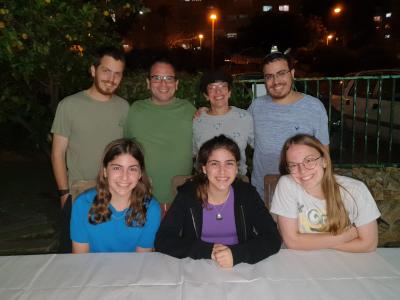 I was born and raised in New York, the younger of two sisters. When we went on the rare family vacation, most of those vacations were here in Israel-the first one being in December 1973, a month after the Yom Kippur War ended. I was 7.5 years old. Thus, Zionism and a love of Israel were instilled in me from a young age.

When it came time to decide where to spend my gap year, there were very few choices of where to learn. Orot fulfilled what I was looking for-it was outside Jerusalem, we got to live in apartments instead of dorm, and we got to mix with Israelis on many different levels; in our apartments, going shopping, dealing with the banks, etc. Equally important in my mind, we got to learn WITH Israelis in class something that didn’t occur at other places. It was fully integrative.

Orot enhanced my love of Israel-the staff, the classes, the informal learning. Starting with Judy Ford always being there for us on so many levels-greeting us, helping to get us set up, joining us in all our shenanigans (pajama and chocolate parties, etc.), hosting us for Shabbatot and just being there for us. Who can forget tiyulim with Sapir-how many times did we get lost??!! However, those tiyulim were THE BEST. We spent Shabbatot together in many different places. Thus, we got to see so much of Israel. Who could forget Dr. Litman ז"ל, Idit Itzkowitz, Rav and Rabbanit Felix and so many others.

After my year at Orot, I returned to New York, and studied at Queens College. I got my BA in Elementary Education and my MSed in Teaching English to Speakers of Other Languages. The idea was that, so long as I was a teacher, having a degree in teaching English would be incredibly useful in Israel, as making Aliya was always on my mind. While studying for my Masters, I got married. Thankfully, my husband also had Aliya on his mind. Thus, nearly three years later, 27 years ago this May, we made Aliya. Our five kids (two sets of twins and one in the middle) were all born here. I have been teaching English at Orot ever since. Many of my good friends and neighbors are people I met at Orot. Some things about Orot have changed-location, most of the staff has changed. Unfortunately, the Bat Zion program no longer exists. However, much has stayed the same. Orot still inspires a love of Israel, has a caring staff, is a family. May it continue to do so.