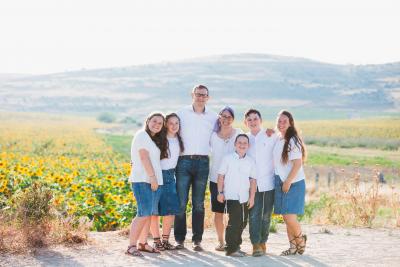 Sometimes it seems that I was at Orot just last year. In reality I was there 28 years ago (1992-3) and sometimes it does feel like a life time ago!

My decision to go to Orot, to the one year Bat Zion program for foreign students, was against the grain of most of my friends at the time, who went to Jerusalem-based Seminaries. Going to Orot was considered a brave decision, going somewhere a bit different, a place that was "more Israeli" and overtly Zionist. There were four of us who went from London together, and we are all still very close.

However, the decision to go to Orot was very clear for me. I looked at Bogrot who had returned to London from different Seminaries and I saw what they did when they returned, their values, how they lived, what they did with their time. The Orot girls where different and something about them resonated with me and who I wanted to become post-Sem.

Looking back at my decision to go to Orot now is particularly poignant as my eldest daughter gets ready to go on her "year off". Of course she is Israeli and going off to midrasha means something different to what it did for me. I keep buying essential things for her "because you will need it for Sem" forgetting that she will be home in 2 weeks' time for Shabbat and can just re-stock her supplies and do her laundry then. She will be living in Jerusalem, 30 minutes from her home in Modiin, 5 minutes around the corner from close friends. My husband will be teaching 5 minutes from her Midrasha once a week and has already set a weekly lunch catch-up with her. This was NOT my Sem experience and I think about how my parents put me on a plane (before cellphones and Whatsapp) to see me in 8 month's time.

But I wasn't worried when I came to Israel for the year. Our Orot year was relatively small (only 48 girls I think) and we all formed a unique bond because we had chosen something different. We were all proud to be the girls who were NOT on Ben Yehuda on Thursday evenings and chose instead to play basketball on the Elkana courts (which most of us had no idea how to play!). Being in our own little enclave turned out to be a big part of the beauty of being at Orot, the experiences, the closeness, the unique language we all shared. Our experiences were infused by the Israeli girls who studied at Orot, by feeling that we were living in the real Israel.

Now 28 years later (and 22 years living in Israel), I think about how Orot influenced me, how it impacted me and was influential in making me the woman I am today. It is sometimes difficult to relate to that young, naïve 18 year old girls from Hendon, who thought she knew it all. Who came back from Orot spouting her religious Zionist dreams and promising to return. I was very lucky that I was able to stick to my "5-year plan". And looking back now, there are some critical things I know for sure helped me to make Aliya as a single 24 year old. Orot educated me in how to have an intelligent, meaningful conversation about being a Religious Zionist woman. It influenced me in who I wanted to marry, where I wanted to live, how I wanted to raise a family, the importance of being an active part of the Jewish people, and the centrality of Jewish values in my life.

Today, I am married to Daniel and we have been blessed with 5 kids. I am super proud of the fact that they have all been born here, in Jerusalem, and are true Israelis. We spent two years on schlichut in Atlanta teaching in the community school and working in the local Jewish community. Daniel has established himself as a respected Jewish educator and I am growing my Yoga and Women's Health business. We have built our home in Israel on the values that I carry with me from Orot. And proof that I have succeeded in the Orot dream is that one of the books my daughter took with her as she started midrasha is אורות התשובה!